Senior Fellows Javiera Francisca Muñoz Mardones and Andree Ashley Tarvin-Pyles served as mentors during this year #100Acts Program, helping other Fellows design and implement small Acts of Global Citizenship to make a tangible difference on an issue that Fellows’ communities are facing. What started at our 2016 Global Citizenship Conference in Chile sparked a number of inspiring initiatives around the globe . We asked Javiera and Andree to reflect on their experiences and share what they learned.

One of Javiera’s chief wishes is to encourage others to seek inspiration in the acts that the Fellows did. She feels that it would be interesting to see what would happen if different Acts of Global Citizenship were taken up and recreated with a different community, or in another world region. 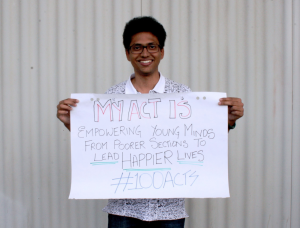 Javiera had participated in the 100 Acts Program previously, and had encountered difficulties planning her acts, such as keeping it simple but effective. She wanted to be a mentor in order to help others avoid the mistakes she had made.

AP genuinely loves helping people bridge the gap between where they are versus where they want to be. He knew that being a mentor for the 100 Acts Program was a great opportunity to do that, because “fellows have such amazing ideas around global issues, and sometimes just need a fresh perspective on how to address them.” 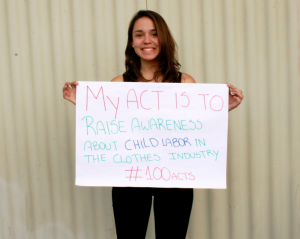 For Javiera, the process “was a continuous learning process full of excitement because I just wanted to execute all this new knowledge, and at the end it was great to see how everything flowed.” As the Acts began to take shape, she felt amazed that “every fellow took an advocacy role about their passions. It is very touching… they are changing the world, but at the same time they are doing something that they love.”

AP said that “to have been able to witness ideas become concrete and tangible actions is always amazing. It makes me feel encouraged about change anywhere in the world. It reminds me that no one act is too small.” 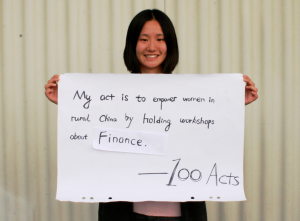 Having watched the acts come to life, AP unfolded an important lesson: “We cannot fear acting upon global issues simply because the singular act may not solve the problem. Even more so, when like-minded individuals come together to advocate for one another’s caus, change is inevitable.” Javiera in turn appreciates how much impact one single act can have, how much impact and potential a good idea can have.

One of AP’s hopes for the future is that fellows – and anyone else inspired by Act of Global Citizenship – can push the bar even further than we have seen this far and use their individual talents to do, engage, and impact even more!

As Howard Zinn said: “Small acts, when multiplied by millions of people, can transform the world”. We hope to inspire many others to follow the example of our Fellows, and look forward to more Acts of Global Citizenship in the future!

Read more about the Acts here!