Home News & Stories Confronting Discrimination: What can people and organizations do to make a difference?
March 26, 2021 by Melton Foundation in Diversity, Equity, Featured, News

Confronting Discrimination: What can people and organizations do to make a difference? 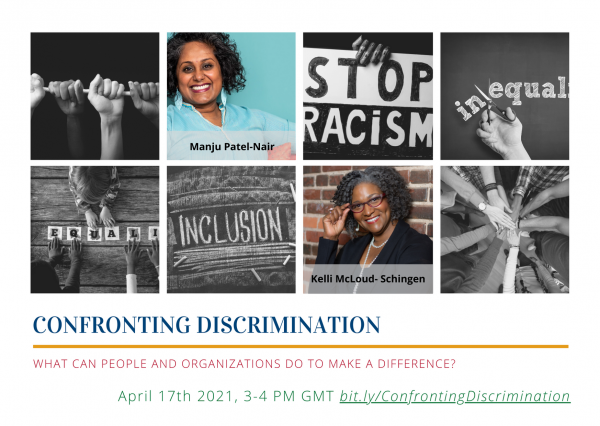 Joining us as panelists were two seasoned individuals from different walks of life but with a common goal of putting a definitive end to discrimination. Kelli McLoud-Schingen, President of KMS Intercultural Consulting, is a Global Diversity and Inclusion Specialist with over 30 years of experience in the Diversity and Intercultural Fields. Our second panelist, Manju Patel-Nair ‘set up ChangeMakers UnLtd to deliver training and international consultancy, focusing on racial justice, community cohesion, global citizenship, and development education. 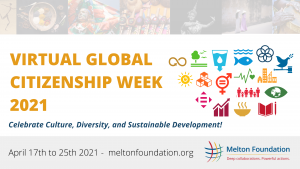 The Melton Foundation values the uniqueness of every person. Our diverse backgrounds enrich our communities and expand our perspectives. We condemn all forms of discrimination. In an attempt to confront discrimination in all forms, and gathering inspiration from Zero Discrimination Day 2021 which rang the bells to end discrimination surrounding income, sex, age, health status, occupation, disability, sexual orientation, drug use, gender identity, race, class, ethnicity, and religion, we launched the Virtual Global Citizenship Week 2021 with an Anti-Discrimination Townhall featuring top educators, trainers, and activists!

Catch the full recording of the Townhall above! 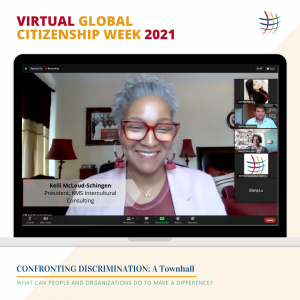 Kelli McLoud-Schingen, President of KMS Intercultural Consulting, is a Global Diversity and Inclusion Specialist with over 30 years of experience in the Diversity and Intercultural Fields.  Kelli specializes in global diversity, equity and inclusion, healing racism, cross-cultural competence, conflict resolution/mediation, storytelling, and inclusive leadership. She has facilitated workshops for educational, non-profit, government, and corporate institutions in the USA and globally since 1989. Kelli is co-author of the “Cultural Detective: African American”, a contributing author for Sage Publications of “Prejudice, Bias, and Discrimination”, and a certified professional mediator and administrator for the Intercultural Development Inventory (IDI). She holds a B.A. in Communication and an M.A. in Cross-Cultural Studies. She is also an accomplished actor and director and founded the World Stage Theatre Company where she serves as the Artistic Director.  Kelli is a member of the Global Community Dialogue and is a Past-President and Advisory Board member for the Society of Intercultural, Education, Training, and Research.  She is based in Tulsa, Oklahoma, USA.

The first impulse session was anchored by Kelli McLoud Schingen who introduced herself as a storyteller. Growing up in the safety net of her community located on the southern side of Chicago, she witnessed an incredibly rich culture during her upbringing. Her first encounter with discrimination was when she ventured out of this familiar setting. Faced with the harsh reality, she was compelled to reflect at every stage. She had more questions than answers and she was sorely perplexed at why people could not understand that ‘all of us are more of a family than strangers’.

She stressed further the misperceptions people harbor about strangers or anything unfamiliar. Kelli opined that it is when we view strangers as perceived threats that we begin to frame laws and policies which in turn propagate anti-discriminatory practices. Quoting her,

“We treat people in ways that keep some of us comfortable and the rest uncomfortable.”

Global society has gone through colonization and enslavement, and the historical legacy has infiltrated the lives of generations. At this point, Kelli duly notes that we need to practice not just be good storytellers but also good story-listeners,

“To open our hearts and minds and take in the perspective of a different person’s reality.”

At the end of the day, we want to be seen as we see ourselves. Kelli illustrates this point with a famous Swahili phrase – ‘Sawubona’ – a greeting which says ‘I see you’, to which the response is  ‘Yebo Sawubona’ – ‘we see you’. This greeting is also a way of giving respect and value to each person’s individuality, which is in stark contrast to the devaluing of the bodies of black women and men that takes place during racial violence. 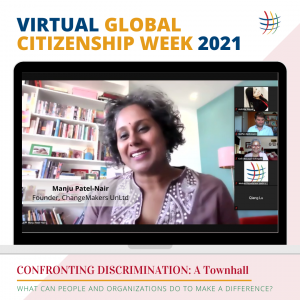 In her own words, Manju Patel-Nair shares, “After 17 years as a teacher, I set up ChangeMakers UnLtd to deliver training and international consultancy, focusing on racial justice, community cohesion, global citizenship, and development education. Today I am committed to creating safe and courageous learning environments, beyond formal education spaces. I enjoy considering new ‘wisdoms’ to bring to my work – be it a chance encounter on the Tube, Dani D’Emilia’s ‘Radical Tenderness Manifesto’, a poem by Tagore, or a scene from a George Lucas movie. My practice is informed by philosophies both within and beyond familiar western thinking and incorporates the best parts of my unique upbringing. I thrive when my work leads clients to find in themselves the ability to hold difficult conversations. It is a joyful moment to see someone recognize in themselves the Changemaker and tap into their UnLimited capacity for growth.”

Manju observed that real, impactful, and lasting change can only be brought about by shifts at the ‘individual’ level of an organization. The idea of setting safe spaces encompasses that we actively shift our stance from merely understanding to taking tangible action. Manju emphasized the three Ps – positionality, power, and privilege as pillars for reference while taking any action in any sphere of influence. The dialogues these actions yield may be uncomfortable but more significantly they are inevitable.

But how do we practice what we preach? Commitment to justice has to run through every space we participate in – be it our family, school, university, or workspace. We need to engage hearts and minds in the process and challenge the status quo. We need to bring, as Manju beautifully coined it, ‘courageous compassion’, where we try to catalyze change with compassion and understanding. 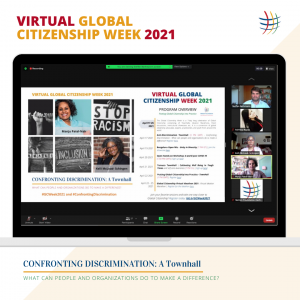 As the impulse sessions drew to a close, the TownHall shifted to a conversational mode where the audience and the panelists interacted to find common solutions to widespread dilemmas. In response to a question by moderator Steffen Bethmann on whether the newfound enthusiasm spurred by the Black Lives Matter moment would be sustainable or not, Kelli Mcloud-Schingen responded positively saying that there had indeed been an increase in awareness, a sort of awakening of the masses. Unlike before, people now feel that they have to do something more than just performative allyship.

Yet another question pondered on how individuals can switch from awareness to action and stand up against discrimination when they see it happening in their everyday lives. To this, Manju Patel-Nair said that not everybody can be an activist, a protester or a demonstrator.But what we need to do is confront the people who subscribe to racial misperceptions and interact with them so that instead of personalizing the issue, we get to the root of prejudices and encourage the other person to come out of such narrow notions.

Before the TownHall rounded up, there was one more question for our panelists –

How can one detect one’s own biases in a reflective manner? The answer – diversifying our circles, expanding them to people with different stories, backgrounds and experiences is a major step in the direction towards greater self-awareness!

Witness our conversation with the trainers, educators, and activists Manju Patel-Nair and Kelli McLoud-Schingen, held on April 17th, 2021, as we voiced our support for the anti-discrimination movement!