Before the over 500 fellows around the world, the dozen international events, and the impactful collaborations and projects connecting across continents, the Melton Foundation started little. With only eight students -four in Germany, four in the United States-, the Foundation took the first steps towards what would turn into decades of impactful collaboration and cross-cultural learning programs that would benefit thousands of students around the globe. 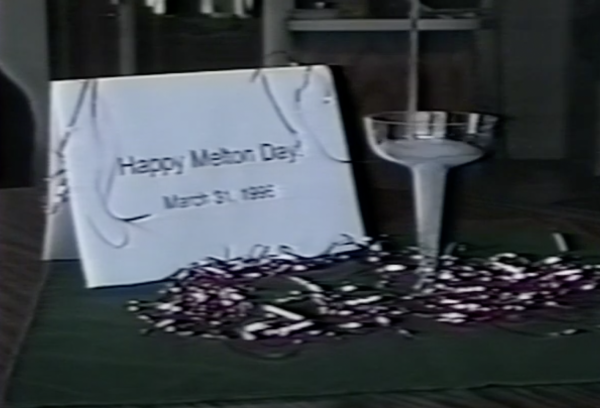 The Melton Foundation was founded in 1991 by entrepreneur William (Bill) Melton and activist Patricia Smith. As the decade was marked by crucial events worldwide (economic and social change in India and China, the end of the dictatorship in Chile, the fall of the Berlin Wall, etc.), Patricia and Bill took the step to build an organization that would help bridge gaps on intercultural communications, to enable a cross-cultural collaboration towards the worlds’ shared social, political and economical challenges: The Melton Foundation. 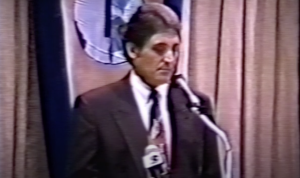 Our Founder, Bill Melton at the first celebration of the Melton Foundation Fellows.

In the same year, Westmar University (WU) in LeMars, USA, and the Friedrich Schiller Universität (FSU), in Jena, Germany, joined forces with the emerging Foundation to collaborate in its mission. Between the two universities, the first batch of eight Melton Fellows was born and taken under the stewardship of the first Foundation Directors: Chuck and Harriot Semke. The BMS College of Engineering (BMSCE) in Bangalore, India, quickly followed the call and joined the partnership the next year. With three university partners, the Melton Foundation delivered its first-ever Senior Fellow in 1992.

The Melton Foundation rapidly grew as a worldwide brand. Its first logo (designed in 1992), represented the use of technology in global connections and learning through an open book and a crossed globe. The first Symposium -the root predecessor of the now called Global Citizenship Conference- was held in WU Campus, Lemars, Iowa, under the topic “Cross-cultural communication”, and was attended by students from all over FSU and Westmar. The first global event included ceremonies, day trips to Sioux City and Lake Okoboji, piano performances, and insightful discussions led by founder Bill and Patricia.

“A special memory for me was time on the Westmar Campus hanging out and taking the German fellows to Wal-Mart in my “big” American car to buy Reese’s peanut butter cups and peanut butter,” a WU fellow remembers.

The first version of the event was immensely successful, and the topic was replicated in the Symposium of 1993, held in FSU Campus, as the fourth university partnered up with the Melton Foundation: Zhejiang University (ZU), from Hangzhou, China. “I remember going on hikes with the German fellows to the Fox Tower. We were always hiking somewhere with the Germans then! We had long discussions of philosophy with all the Fellows and the Task Team members. We also visited the Buchenwald site of the Holocaust. I remember, that day, we were all silent on the bus ride back to the hotel,” a fellow recalls. “But otherwise we spent the bus rides learning and bellowing songs, led by Kai on his guitar. Now that I think about it, he was probably teaching us the songs meant for German kindergarteners!” they laugh.

It was the year 1994 when the Melton Foundation welcomed another culture into the family: Universidad de La Frontera, based in Temuco, Chile, joined in the partnership during the third Global Citizenship Symposium; turning into the first institution in South America to become a collaborator of the Foundation.

“Oh, I remember when the Chileans joined in!”, shares an Indian Fellow. “They took pleasure in pranking each other with the super-spicy pickles that the Indian Fellows carried, practically rolling on the floor with laughter as their unsuspecting victims’ eyes streamed with tears!”, they laugh as they remember.

The Symposium of 1994, the first to be hosted by the BMS College of Engineering, India, was powerfully meaningful, as now four cultures filled the room with meaningful conversations, intercultural exchanges, and the ever-growing goal to learn and discover more and more from the world and each other.

The following year, a new partner’s arrival would bring a wave of change to the Melton Foundation. Dillard University (DU), based in New Orleans, USA, joined the family in 1995, quickly establishing itself as the second American institution to partner up at the time. Following this welcome, the Melton Foundation received the first-ever batch of DU Fellows, as the Board of Alumni was brought into existence under the stewardship of Debb Vanderhaar-Arens, who would lead the Board in this role until 1999.

With Fellows from the United States, Chile, India, Chile, China, and Germany, the Melton Foundation escalated into an intercultural, ever-learning safe space for young leaders to learn, share experiences, work together, acquire crucial abilities for an intercultural scope of work, and -just as important!- the opportunity to nurture friendships within a global family. This was clear to observe during the Global Citizenship Symposium of 1995, held by ZU Campus, in Hangzhou, China.

“I remember the long walks across the huge Zeijiang campus with the Chinese fellows, my wonderful roomie, Zhou Qing, as well as my favorite Task Team member, Dr. Ying,” a Fellow shares.

“We were amazed by the massive scale of China even back in the ’90s. We were introduced to green tea and eating with chopsticks – this made us seem very sophisticated when we got back home,” they laugh. “Of course, we all tried on the various opera costumes, I think that remains a tradition even today!”

As the 5-year anniversary of the Melton Foundation approached, in 1996 Fellows organized the first Global Citizenship Symposium in UFRO Campus, Chile. With this event, the Melton Foundation officially held its global event in all five member countries. During this event, Melton Fellows had the opportunity to visit the natural monuments and landscapes of the southern forests of Chile.

“I actually remember the cultural vignettes like viewing the beautiful Villarica volcano. I remember Tejasvini giving a dance performance at UFRO; the audience was totally charmed.  We also visited a llama farm in Temuco and were struck by the silence and beauty of the surrounding forests.”

Of course, the intercultural exchanges and growing relationships between such diverse cultures were seen again this time. “One of our favorite pastimes was to translate our complicated Indian names into Spanish and be struck by wonder before our new identity.”

From the very beginnings of the Melton Foundation, as a few-partner Foundation and eight Fellows setting the first stones of its mission, the Melton Foundation thrived and proved to hold the great potential in sparking intercultural communication and creating interdisciplinary learning. As partners joined in and larger batches of Fellows graduated, the Foundation started a journey of populating the world of global citizens, cross-border friends, innovation leaders, and impactful changemakers. A place for thinking critically, acting collaboratively, and defying norms and expectations of social and political issues around the world.

“I feel privileged to have been a part of the Foundation, I hope that my son when he goes to college can be a Melton Fellow, too,” a Fellow shares.