Safi Sana, Swahili for "very clean", won the 2016 New Business Challenge, a unique business case competition where Dutch and Ghanaian students and starters work together in mixed teams on solutions for companies. Ashesi Melton Fellow Kwabena Ankrah, a member of the winning Safi Sana team, reports on the project and what makes it special: 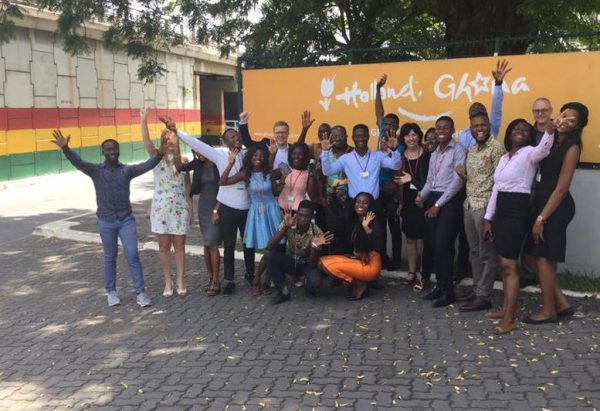 Safi Sana, a Dutch company which has established a franchise in Ghana, has 3 main pillars: Sanitation, Energy and Agriculture. In very simple terms, Safi Sana kills two birds with one stone by taking organic waste from urban slums, then converts this waste into renewable energy for cooking and electricity. They also make use of the waste remains as fertilizer for agricultural purposes.

One primary means they obtain their organic waste is through toilet blocks, which they install in very remote locations where toilet facilities are not available for a very affordable price.

One such toilet block was placed in Teshie, a suburb of Accra. But after a while, the Safi Sana team was stunned to discover that the blocks were not producing the intended results. Teshie residents were not using it; instead, they preferred to go to the sea to do their business. Safi Sana was looking for an innovative way to solve this issue, and this is where we students came in.

I got involved in the Safi Sana project through the New Business Challenge, where selected students from a pool of over 600 in Ghana are paired with selected Dutch students from the Netherlands to solve 10 complex real-life business problems for a month. The challenge included traveling to the Netherlands for two weeks and coming back to Ghana for an additional two weeks to work on the allocated problem cases. In the end, we presented our solutions to an independent panel and the head of the organizations.

After spending several days doing our ethnographic research in order to gain insights into the crux of the problem in Teshie, we realized that we were faced with a behavioral problem that was being caused by a problematic mindset. So we developed our solution to incorporate a progressive paradigm shift strategy mixed with incentives to encourage residents to gradually stop defecating into the sea and reduce improper disposal of plastic waste.

Through the use of market surveys and focus group discussions, we were able to find out what most of the people living there love to do, so we came up with two prototypes to see if, by offering incentives they like, they could start doing the right thing. Thankfully, we succeeded to find a very workable way to motivate the people to use the toilet block instead of the sea through the incorporation of these incentives into the toilet system.

We found out people there loved three things: television, money, and sex – unprotected sex to be precise, since they found the price of condoms ridiculously high for them to purchase. (Incidentally, this also brought to light why there was so much teenage pregnancy in the community). So we touched on these three things.

We received a very positive response from young adult males, who agreed to come to the toilet block if Safi Sana would give them free condoms for their business. A lot of the women and children also said they would stop using the sea if Safi Sana had a public television that showed cartoons and soap operas.

We decided to change the payment system so that people could use plastic waste as their means of payment to use the toilet facilities. In this way, they were motivated to scavenge and collect the plastic waste scattered in the community and keep the rest that would have also been dumped to use as currency. For their trouble of collecting, keeping and bringing the plastic waste to the toilet block, they are paid 30% of the price for the weight of waste they brought and the 70% is converted into tokens for them and their families to use.

It’s a win-win solution. People were very happy upon hearing this. And Safi Sana will get their money back by selling the plastic waste brought to recycling companies, which will totally cover up for the cost.

With the help of the Ghana Aids Commission and Marie Stopes International, we secured Safi Sana access to free condoms to give to males of age who patronize the place. We also contacted plastic recycling companies such as Boateng Recyclers and Trashy Bags, who agreed to work with Safi Sana with pickup and reimbursement for the collected plastic.

The panel and executives of  Safi Sana were very pleased and as of now are rolling out this solution strategy, which they have said is going very well. Their patronage has more than doubled and plastic pollution and open defecation has reduced drastically within just a very short period of time. The organization wishes to work with us in the long term to help them expand the solution to other communities.