The second pre-GCC activity of this season kicked off with an online session led by Katie Hale. Katie began by giving us an overview of the Mama Hope network. Mama Hope emphasizes providing individuals with resources to live healthy and happy lives.

As Katie explained, we got to see that Mama Hope aims to build a self-sufficient society. Katie trains fellows in fundraising, storytelling, human-centered design, cultural awareness and servant leadership, as they begin collaboration within Mama Hope’s partner organizations around the globe. 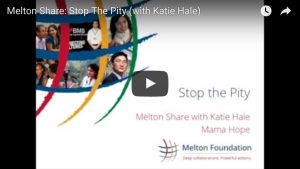 We then saw some guidelines that could help us ‘Stop the Pity’. For example, listening with commitment, asking valid questions, and treating people as active participants, rather than as objects of study. Refusing to reinforce stereotypes is also important.

By the end of the session, we were given directives to Choose a “Pity” and a “Potential” video, and to draw contrasts between the characteristics of the two. In addition, fellows were encouraged to find media from their region of the world that breaks the “Pity” narrative and share it.

Fellows were also asked – How does ‘Stop the Pity’ relate to what you are going to do during the 2017 Global Citizenship Conference (GCC)? What implications do you draw from it while being at the conference and/or beyond?

The conversation began when a fellow from India said that the video about Hollywood Stereotypes by the African Men has a first person narrative.

The fellow expressed, “The entire video has the men themselves speaking and voicing their thoughts and opinions. It has a very ‘real’ feel to it, which makes us viewers comprehend their situation better. The video highlights how stereotypes may affect how we view certain communities, which I think is a great start to a fruitful discussion to break free of the aforementioned stereotypes. Through it all, the message the video aimed to deliver came through crystal clear.” 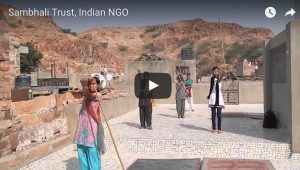 The video about Sambhali Trust’s women and children empowerment projects in 2014.

The fellow also added a reference to a video from India, made by an organization called the Sambhali Trust, which focuses on all-round education for women.

To quote, “what I loved about this video, is how they show older women also willing to educate themselves, while also enjoying the whole process. The video does not make it seem like the women in these rural areas have no hope. Instead, it highlights just how empowering it is for these women to have access to knowledge and essential skills.”

When asked about the connect between ‘Stop the Pity’ and the GCC, she said, “I think the concept of ‘Stop The Pity’ is fundamental in our journey of becoming better global citizens. Not giving in to stereotypes and seeing a problem for what it actually is, only enables all of us to take the right steps to alleviate it.

The fellow continued, “sometimes, when all the knowledge we have about a certain place comes from stereotypes associated with it, doing some basic research would help us obtain a clearer picture of the ground reality. By being proactive and responsible enough to take concrete actions rather than just showing pity by believing only the stereotypes, we could all go a step forward in making lives of people better.”

Another Junior Fellow from Chile added to the conversation by saying, “after a little research on how the media presents Africa here in Chile I am happy to say that I couldn’t find pity videos being promoted in Chile. Nevertheless I still have the feeling or the idea that most of the people in Chile still think of Africa with pity. I’ll do a little field research and share the results with you at the GCC.”

This was interesting to hear and meant that the Melton Fellows were ready to engage in discussions around Stop the Pity at the GCC.

The discussion also had other interesting perspectives, such as the one from one of our fellows from the US.

The fellow said, “when I watched the video entitled African Men Hollywood Stereotypes, it really showcases that we all must be mindful about our thinking and stereotypes of others and stereotypes of the media and various communities at large. It teaches us to work more from a place of community and teamwork, versus going into places thinking we as outsiders or non-locals have all the answers, when teamwork from within the community and maybe also from others is key to bettering the community as well as showcasing these authentic narratives.”

At the Melton Foundation, we encourage fellows to interact with different branches of society and look for solutions objectively. Our storytelling project teams take up passion projects and document scenarios and stories that not only elicit emotional experiences, but also logical ones with a problem-solving attitude.

At this GCC, we will strive to change the single dimension narrative and make the call for a paradigm shift. The highlights of the GCC are our Springboard Sessions and Hands-On GCC projects, where you get to witness global citizenship leaders share their stories. See you there!

Curious about what happened during the first pre-GCC-activity? Find out here!.