Daphne Chebesi, a Junior fellow with the Melton Foundation from Cameroon and a student at Ashesi University is fundraising to support the education of primary school pupils who have been internally displaced by the civil crisis in the English-Speaking Regions of her country. Through her project inspire for peace, she aims at providing school bags, notebooks, and school stationery for 100 Internally displaced aged primary school pupils who are currently studying in Douala Cameroon, home to one of the largest populations of internally displaced persons from Cameroon’s English-Speaking Regions. 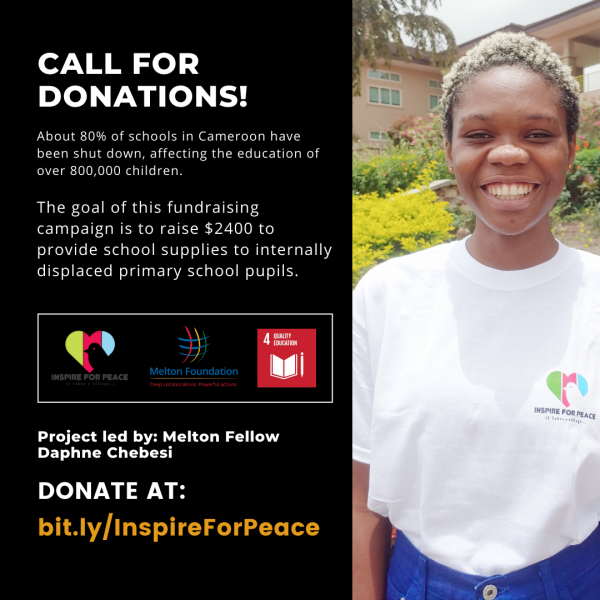 Project Goal: The goal of the fundraising campaign is to raise $2400 to support the education of internally displaced primary school pupils. 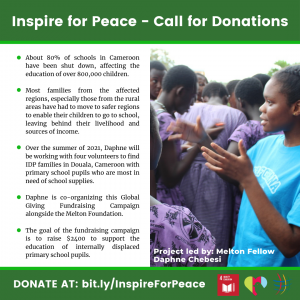 The Civil Crisis in Cameroon’s English-speaking regions where I come from has had the most impact on education. About 80% of schools in the region have been shut down, affecting the education of over 800,000 children. Beyond the visible and common impacts this has on pupils and students, it has psychological impacts as many of them live in worry every day about what their future is going to look like. Most families from the affected regions, especially those from the rural areas have had to move to safer regions to enable their children to go to school, leaving behind their livelihood and sources of income. Despite this sacrifice, some of these children may still have to drop out of school because of the financial burden of their education on their families. I am starting this project to support the education of such children in the smallest way I can so that they do not have to drop out of school. The project is still in the initial stages and hopefully, it can support as many children as possible to stay in school until they can safely return home. I specifically targeted the project at primary school pupils because they are more vulnerable and need more help. Also, everyone deserves to have a basic primary school education because it is a fundamental human right.

While in primary school, we were often told that we are tomorrow’s leaders. Here I am wondering to myself what becomes of the future of thousands of children from Cameroon’s English-Speaking Regions who may have had to abandon school in the past four years. More importantly, what is the future of a country where a huge part of children cannot go to school. Education has made the whole difference in my life and it will be unfair if I seat back and watch other children not have the opportunity to experience what I have experienced.

Over the summer of 2021, Daphne will be working with four volunteers to find IDP families in Douala, Cameroon with primary school pupils who are most in need of these school supplies. This will go a long way to prepare these pupils for the Academic year 2021/2022. Daphne hopes that all the potential beneficiaries of her project can continue school next Academic year and eventually complete primary school.

Daphne is co-organizing this Global Giving Fundraising Campaign alongside the Melton Foundation. The goal of the fundraising campaign is to raise $2400 to support the education of internally displaced primary school pupils. The money gotten from this fundraising campaign will be used to purchase school bags, notebooks, and school stationery for 100 of these school pupils. You can donate today to support the education of an internally displaced child to guarantee them a better place in society tomorrow.