This post is the first Featured Act from our 100 Acts of Global Citizenship program. To discover more acts, visit our campaign page!

Vladimir Fomene, a Melton Fellow from Cameroon, studies Computer Science at Ashesi University. When he started thinking about his Act of Global Citizenship, Vladimir wanted to address a social cause in his own field of study. That’s how he came up with the idea to empower young people, especially girls, with technology skills.

“When I started coding, I realized that things would have been easier if I had started when I was very young,” Vladimir said. “I thought it would give people more opportunities if they start coding at a very early age.”

Vladimir organized a workshop for junior high students at Christ the King International College in Accra which included teamwork activities, a graphic design session and scratch programming session. Although the session was open for both boys and girls, Vladimir especially encouraged the girls to participate actively.

“In STEM fields, there is a gender balance problem because they are dominated by men,” Vladimir says. “Many more girls are interested in going for technology fields, but they are not introduced to these things early on.”

“The kids taught me a great lesson; you can do great things if you are no longer afraid to explore.” – Vladimir Fomene, Melton Fellow

Vladimir brought some of his classmates at Ashesi to help introduce the children to science and technology. “My classmates doing computer science shared their personal experiences of why they went into the field and why they are passionate about technology,” Vladimir tells. In a session about graphic design, they taught them to develop logos and greeting cards. Vladimir also taught them how to program using programming language called Scratch.

The children reacted with curiosity and interest, Vladimir said. “They were playing and open to what we give them. They are not afraid to explore; they played with graphics and came up with some very nice designs. Then, when I taught them programming, I was very surprised by some of it because they came up with some beautiful programs. They taught me that, if you really want to learn something, you have to have an open mind and not be afraid to explore.” 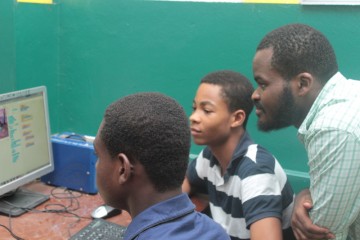 Since the workshop was such a success, Vladimir is already thinking about the next steps. “Right now we are thinking of taking the program to another high school here in Accra. Also, we noticed during the workshop that the children needed some one-on-one mentorship – a contact to someone they could talk to while they are learning. So, next time, we are going to pair each student with a mentor.”

While Vladimir first came up with the project on his own, he says he realizes now that he could not have done this on his own. “It was an initiative that was successful because of a group of people,” he says.