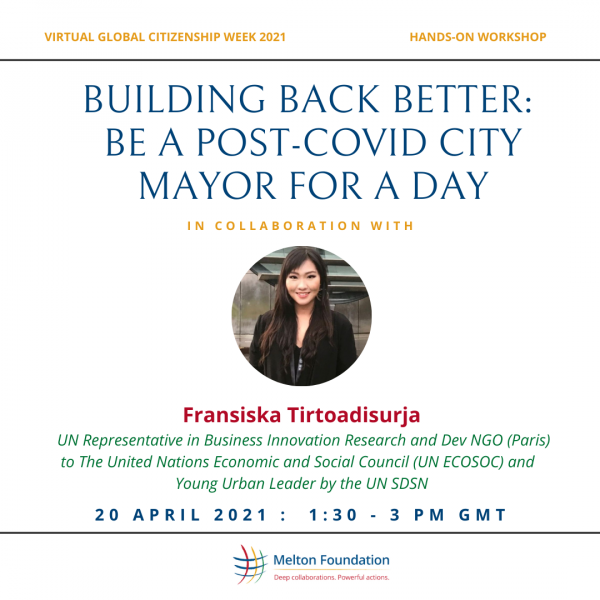 Watch the impulse on ‘Building-Back Better: Become a one-day City Mayor’. In this article, we uncover the principles and need for improved urban city planning and how citizens can play a role in the same!

55% of the world’s population are living in urban areas. It is about more than 4 billion people and predicted will rise to 70% in 2050. In 1970, Tokyo and New York were the only megacities. Now we have over 20 megacities across the globe. Not to mention, cities also experience the worst number in terms of COVID-19 cases.

Post-COVID Cities and Build Back Better

If we talk about Post-COVID cities, what is the best picture of it?

This illustration is perfect-picturing our global efforts of not “back to normal” but “move forward”. The United Nations calls it BBB or Building Back Better. We forget that despite causing chaos in our world, COVID is actually giving us some advantages of how we were able to spend more time with our family, there were less industrial activities and most air travels are moved to online meetings. Build back better imagines our world that never “back to normal” but move to a better future. It is about using more renewable energy, have more time with our beloved ones and others.

This picture is perfect-picturing what city planners and mayors and country leaders talk back then in the UNGA Special Sessions in 2020 for Building Back Better. COVID has brought our Sustainable Development Goals experiencing drawbacks as mentioned by the UN Secretary-General, António Guterres. He also mentioned “Although the novel coronavirus affects every person and community, it does not do so equally. Instead, it has exposed and exacerbated existing inequalities and injustices.” Just because self-isolation is now being forced into more than 190 countries, our world cannot automatically recover its long-term damaging issues. According to UN Global Summit 2020, we still need 257 more years to achieve equal pay in gender equality. 70 million children, women, and men are displaced, 8 million metric tons of plastic enters our oceans every year, and the World bank mentioned about 88 million people are forced to extreme poverty by the pandemic. This is why, we don’t want to stop from what we have before the pandemic, but rather to move forward and build back better.

Despite the mass hopelessness that we experienced together, there were many world and city leaders who agreed upon using COVID not only as a challenge but also as an opportunity to Build Back Better. Still from the UNGASS for COVID-19 BBB, some cities across the globe actually have to use COVID as an opportunity to develop their cities to become a better place. As citizens are unable to travel around the cities, it would be the fastest way to make changes without disrupting people’s activities or putting any risk on any infrastructure developments. Here are some post-COVID unique interventions that I find across the globe from Twitter. 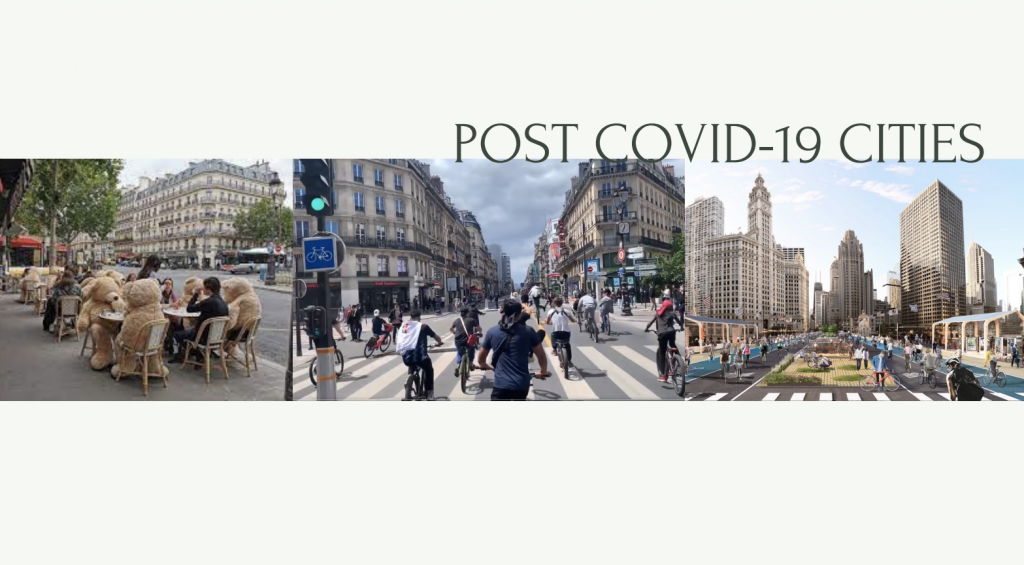 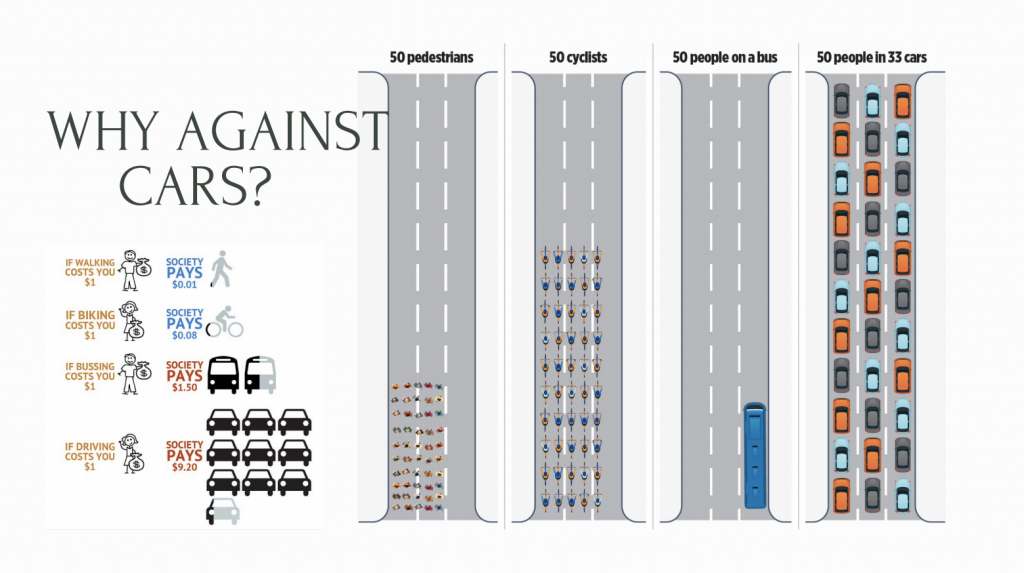 The Unsustainable Use of Private Motorised Vehicle

Those are the same amount of travellers (50 people) with different modes of transport, which are walking, cycle, ride a bus or drive a car. It is a logic of how do cities get their traffic congestion if everyone is driving a private motorized vehicle like cars. We need less space for walking or cycle and ride public transport than driving cars. Also, driving cars cost the community more than other modes of transport. Traffic congestion, in its nature, is expensive

Our communities need to pay a lot of money only for people who own private cars. May we imagine a world where everyone rides public transport? Where we can meet our neighbours and have companions and chats on our ways to university or the office? 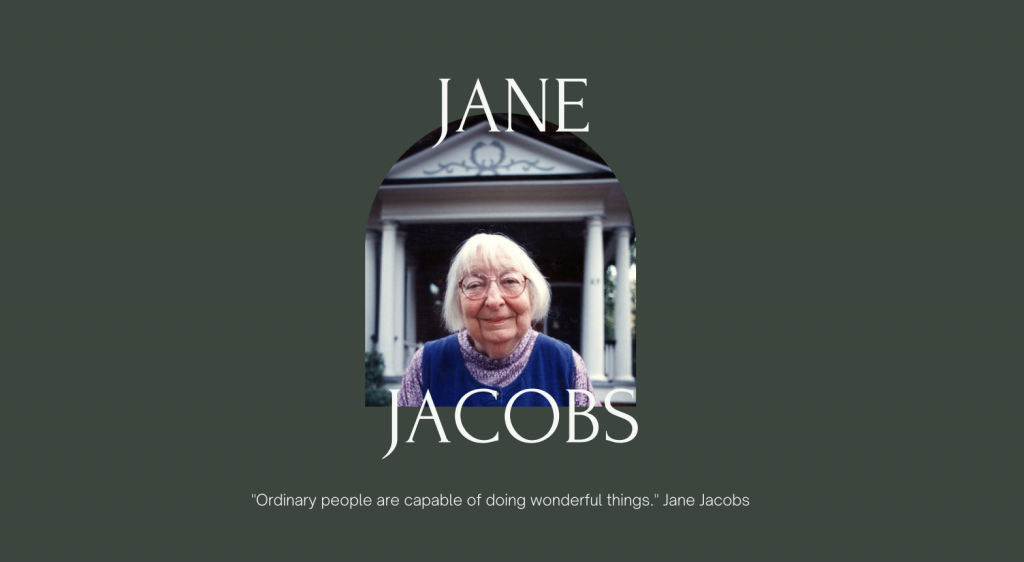 How citizens lead the movement

In planning history, there was an inspiring lady named Jane Jacobs. So, is Jane Jacobs a famous city planner? No, she wasn’t. She was only a journalist and housewife that with her bravery had to encourage communities in New York, the United States to stand against the city leaders and planners. It was pictured that city planner and government bodies were dominated by people who have more concerned to grow economics instead of creating a liveable space for the community. They destroyed settlements to build highways, and change low-rise houses and shops becoming high-rise apartments. Why planners do not always prefer high-rise buildings? Because of the nature of high-rise buildings that are modern, lack community identity, and more prone to individualism, we will then lost our sense of “home”. During that time, New York City was dried, there was plenty of urban renewal movement to change slums or low rise houses into very dense high rise apartments and office blocks. New York was designed as a home for infrastructure, not for people. But then Jane Jacobs invited her family and fellow citizens to conduct collective actions to create a new vision of New York City that is more humane and greenery, and more buildings that are more friendly for human scale.

Amanda burden, one of New York City’s planners also act to close some part of New York City from cars so that citizens can walk freely without being hit by cars. This is the reason that all of us can contribute to implementing Sustainable Development Goal 11. SDG 11 is not only the responsibility of city leaders but also all of us as citizens.  More cities in the world like the United Kingdom and others now have a more-citizen focus city planning and giving the citizen more power to talk and make changes. This is why, change is possible, and it can start for anyone, including a housewife like Jane, including me, including you.

Let us build back our world to become a better place for our current and future generations! Watch the full impulse here.